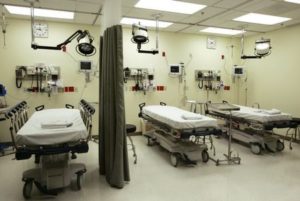 In Britain’s health care system, rich patients and poor patients have the same access to doctors. In France, patients pay nothing for primary-care visits and medications related to 30 common chronic conditions. And in the Netherlands, the government forces private insurance companies to compete on the quality of care patients get, while penalizing them for choosing healthier patients over sicker ones.

All of those countries score higher than the United States in a new study by the Commonwealth Fund ranking the health care systems of 11 affluent nations. The US, in fact, ranks last, which is hardly surprising, given its poor showing in many similar studies. Americans pay more for health care than any other nation on earth, but get middling results, at best.

Republicans in Congress are debating controversial new health care legislation that you might expect to address some of these chronic shortcomings of the American health system. But they don’t. The new legislation, in fact, might make aspects of the US system even worse. A Senate bill due for a vote soon, for example, would cut Medicaid spending, leaving fewer Americans with health coverage and worsening one part of the system in which the United States already ranks last.

The Commonwealth study analyzed the health systems of Australia, Canada, France, Germany, the Netherlands, New Zealand, Norway, Sweden, Switzerland, the UK and the United States. It ranked each country in 5 broad categories: access to care, the process involved in receiving care, administrative efficiency, equity, and health care outcomes. Here’s how each country ranks in each of those 5 categories (the lower the number, the better the score):

The United States ranks last or second-to-last in all of those categories, except for one. It ranks 5th in process, reflecting a relatively strong performance on sub-indicators such as doctor-patient relationships, wellness counseling, chronic disease management and end-of-life discussions. Among the worst aspects of the US system: access to care, affordability, infant mortality, life expectancy, and the disparity of care available to high- and low-income patients.

The Affordable Care Act, which passed in 2010 and went into effect in 2014, improved access to care by helping some 20 million Americans who didn’t have health care coverage obtain it. But even with that improvement, the US remains dead last among the 11 affluent nations in terms of access to care. And Republican efforts to dismantle or scale back the ACA threaten to knock as many as 23 million Americans off insurance(including Medicaid), which would make an already dismal ranking on this measure even worse.

If Congress were interested in improving the overall health care system, the first thing to do – instead of fighting battles over political ideology – would be finding ways to rein in costs, which are far higher in the US, on a per capita basis, than in any other developed nation. Try to guess from this chart which line represents the United States: 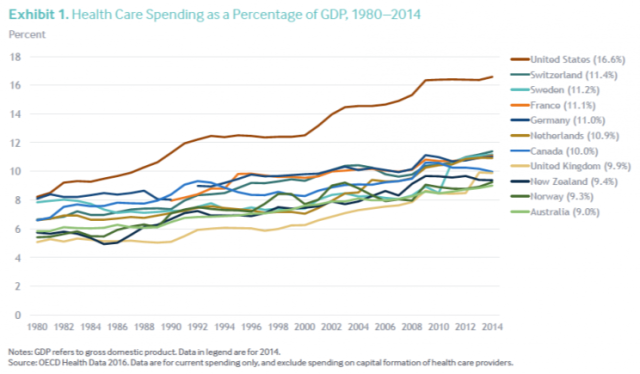 Many analysts have proposed ways to do that. The United States could standardize basic benefit packages across providers and insurers, which would reduce bureaucracy and waiting times. More investment on preventive care would cut spending on emergency care, which is almost always far costlier. More transparency on pricing might let patients make more cost-effective decisions, and if doctors had financial incentives to speed patients to health instead of treating them indefinitely, it would probably produce the desired results.

The United States also remains the only advanced nation that doesn’t have a universal-care system that covers everybody; even the ACA left nearly 30 million American uninsured, and millions of others scrambling from year to year as their circumstances change and they seek new sources of coverage. This produces massive inefficiencies in the US economy, as Warren Buffett and many others have pointed out; no other nation relies on employers, for instance, to administer health care to the majority of the working-age population.

So the United States seems destined to bumble along with worst of both worlds—health coverage that costs more than it should yet delivers subprime results. Congress might do something this year, but nothing to fix the worst problems in the US health care system.