BREATH: THE NEW SCIENCE OF A LOST ART - MindBody Medicine

BREATH: THE NEW SCIENCE OF A LOST ART

Knowledge / Articles / BREATH: THE NEW SCIENCE OF A LOST ART
Share this...

BREATH: THE NEW SCIENCE OF A LOST ART

By James Nestor released May 26, 2020, by Riverhead/Penguin Random House and was an instant New York Times Bestseller.

God breathed the breath of life into man’s nostrils, and man became a living soul.       Genesis 2:7

Master of breath is master of life.       Hindu Aphorism

Overbreathing, or unconscious  mild hyperventilation, is very common in modern society.  According to Teresa Hale, writing in her book, Breathing Free, The Revolutionary 5-Day Program to Heal Asthma, Emphysema and Bronchitis, “nine out of ten people overbreathe.”   Overbreathing is defined as “abnormally rapid deep breathing”, and the outcome of overbreathing is loss of carbon dioxide, which, like oxygen is important in regulating our health. Carbon dioxide is required to maintain optimal blood pH, maintain respiratory drive, and regulate the release of oxygen from hemoglobin.  In other words, carbon dioxide combines with water to form carbonic acid which lowers the pH which, in turn, helps hemoglobin release oxygen to the tissues.  Conversely, low carbon dioxide causes less oxygen release in our bodies.

Overbreathing, or unconscious hyperventilation, is often a issue in the epidemic of chronic diseases in our society.  Just as doctors are not trained in integrative medicine, overbreathing is not commonly recognized until it becomes classical hyperventilation which often sends a person to the Emergency Room with of shortness of breath, feelings of not getting enough air, faster heartbeat, faint, lightheaded or dizzy sensations, as well as pain or tightness in the chest.  Basically an unconscious breathing pattern has intensified becoming a medical emergency.   In my days working in the ER I have seen the panic in these patients as they enter the ER, and they quickly improve by re-breathing into a paper bag sealed around the mouth and nose.  Hyperventilation results from nervousness, anxiety, and stress, conditions which are all too common in modern times.

HOW CAN YOU TELL IF YOU ARE OVERBREATHING?

The CONTROL PAUSE (CP) TEST will tell you and is done like this:

A Control Pause of

30 to 50 seconds means hyperventilation is a concern

Less than 10 seconds correlates with a serious hyperventilation problem  and is often associated with asthma, or some other health problem

SELECTED MEDICAL EXAMPLES OF THE SCIENCE AND BENEFITS OF HEALTHY BREATHING

Katharina Schroth, Dresden, Germany 1900s: reversed her scoliosis with “orthopedic breathing” training and later assisted 150 scoliosis patients, many with severe curvatures of the spine, to straighten their spines with breathing techniques.

Paranasal sinuses continually produce nitric oxide (NO), a reactive oxygen species that diffuses to the bronchi and lungs to produce bronchodilatory and vasodilatory effects. Studies indicate that NO may also help to reduce respiratory tract infection by inactivating viruses and inhibiting their replication in epithelial cells. Simple devices that promote nasal breathing during sleep may help prevent the common cold, suggesting potential benefits against coronavirus infection.

“A calming practice that places the heart, lungs, circulation into a state of coherence, where the systems of the body are working at peak efficiency. There is no more essential technique, and none more basic.”

BreathEasyFree and iBreathe are two apps available for visual guidance and support in conscious breathing.

THE FOLLOWING IS A REVIEW OF BREATH, THE NEW SCIENCE OF A LOST ART, by James Nestor 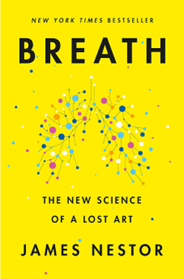 No matter what you eat, how much you exercise, how skinny or young or wise you are, none of it matters if you’re not breathing properly.

There is nothing more essential to our health and well-being than breathing: take air in, let it out, repeat 25,000 times a day. Yet, as a species, humans have lost the ability to breathe correctly, with grave consequences.

Journalist James Nestor travels the world to figure out what went wrong and how to fix it. The answers aren’t found in pulmonology labs, as we might expect, but in the muddy digs of ancient burial sites, secret Soviet facilities, New Jersey choir schools, and the smoggy streets of Sao Paulo. Nestor tracks down men and women exploring the hidden science behind ancient breathing practices like Pranayama, Sudarshan Kriya, and Tummo and teams up with pulmonary tinkerers to scientifically test long-held beliefs about how we breathe.

Modern research is showing us that making even slight adjustments to the way we inhale and exhale can jump-start athletic performance, rejuvenate internal organs, halt snoring, allergies, asthma, and autoimmune disease, and even straighten scoliotic spines. None of this should be possible, and yet it is.

Drawing on thousands of years of medical texts and recent cutting-edge studies in pulmonology, psychology, biochemistry, and human physiology, Breath turns the conventional wisdom of what we thought we knew about our most basic biological function on its head. You will never breathe the same again.