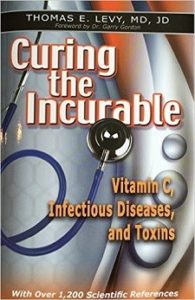 Thomas Levy MD has rendered an invaluable service to us with this superb book which should be mandatory not only for physicians and health practitioners, but for all health-conscious individuals. I cannot recommend it highly enough.

This book, with over 1200 references, describes in great detail the work, using intravenous, intramuscular and oral ‘optidoses’ of vitamin C – 1,000 mg to 300,000 mg – of medical giants, particularly Dr Frederick Klenner MD who saved innumerable patients suffering from polio, viral encephalitis, snake bite and many of the above conditions from death and disfigurement, and Dr Robert Cathcart who did significant work with vitamin C and AIDS patients.

This is no dry tome; hundreds of individual cases are recounted, including two patients of the author (prior to his discovery of vitamin C), who died within 24 hours of contracting aggressive encephalitis, as well as the treatment by Dr Frederick Klenner of a 31/2 year old girl bitten by a Black Widow spider who, following nausea and vomiting within 6 hours, developed a fever, swelling and rigidity, becoming progressively stuporous. Following an intravenous injection of calcium gluconate and within 15 minutes by 4,000 mg of vitamin C intravenously, repeated 6 hours later, the fever dropped and the child became awake. Twelve hours later the child was relatively active, with about 50% of the swelling gone. Following additional administrations of vitamin C, the child made a full recovery over the next 4 days.

The same Dr Klenner published in 1949 and presented a paper to the American Medical Association detailing the complete cure of 60 out of 60 of his patients with polio. To anyone growing up during the late 1940s and 1950s, polio, with its mortality and paralysis was a terrifying prospect. Whereas the Salk polio vaccine and later the Sabin oral vaccine have been developed and applied to much of the world’s population, the work of Klenner, in which vitamin C was shown to be able to cure polio, has been completely ignored and forgotten.

Similarly, the tens of millions of AIDS victims, currently dying in Africa and elsewhere are not given the option of treatment with vitamin C, successfully researched by Dr Robert Cathcart, who over a 10-year period has treated over 9,000 patients with vitamin C, including over 250 HIV-positive patients including ones with full-blown AIDS.

Also included in this gem of a book is a wide-ranging treatise regarding vitamin C’s mechanism of action (electron exchange), and a full review of safety-related issues regarding vitamin C, including the widely-held misconception about a causal relationship between vitamin C and kidney stones, vitamin C’s antioxidant and prooxidant properties, vitamin C and intentional immune system suppression (as with organ transplants) and rebound effects following cessation of vitamin C supplementation. Technical suggestions regarding dosages and infusions are also provided.

In my own book published in 1991 Vitamin C The Master Nutrient, which surveyed the literature regarding vitamin C’s therapeutic efficacy with a wide variety of ailments, including cancer, AIDS and heart disease, I too bemoaned that literature from the 1930s onwards was being ignored. Now this even larger book (450 pages), with over a thousand references and hundreds of clinical cases puts the shameful case of the deliberate ignorance (or more likely deliberate suppression) of vitamin C’s life-saving, yet highly safe, non-toxic properties at the doorstep of physicians and the medical profession. Its only fault is the lack of an index, which hopefully will be added in future editions.

For the safety of your own health and that of your family, keep this book at the ready on your bookshelf and find a physician versed in the clinical administration of vitamin C.