From birth onward children suppress intense emotions pain (anger, fear and sadness) automatically in order to survive, similar to soldiers who experience PTSD. Deeply fearful and painful emotions store in the unconscious mind following common experiences of childhood, such as violence, physical or emotional abuse. Unconscious wounds heal by creating life experiences that will bring up the suppressed emotion so it can be expressed and owned consciously. The is called “the natural therapeutic experience” (https://www.healmindbody.com/the-natural-therapeutic-experience/), which transforms the adversity in life into growth and self-understanding.

Children who suffer trauma from abuse or violence early in life show biological signs of aging faster than children who have never experienced adversity, according to research published by the American Psychological Association. The study examined three different signs of biological aging — early puberty, cellular aging and changes in brain structure — and found that trauma exposure was associated with all three. 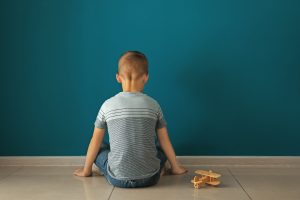 Children who suffer trauma from abuse or violence early in life show biological signs of aging faster than children who have never experienced adversity, according to research published by the American Psychological Association. The study examined three different signs of biological aging — early puberty, cellular aging and changes in brain structure — and found that trauma exposure was associated with all three.

“Exposure to adversity in childhood is a powerful predictor of health outcomes later in life — not only mental health outcomes like depression and anxiety, but also physical health outcomes like cardiovascular disease, diabetes and cancer,” said Katie McLaughlin, PhD, an associate professor of psychology at Harvard University and senior author of the study published in the journal Psychological Bulletin. “Our study suggests that experiencing violence can make the body age more quickly at a biological level, which may help to explain that connection.”

Previous research found mixed evidence on whether childhood adversity is always linked to accelerated aging. However, those studies looked at many different types of adversity — abuse, neglect, poverty and more — and at several different measures of biological aging. To disentangle the results, McLaughlin and her colleagues decided to look separately at two categories of adversity: threat-related adversity, such as abuse and violence, and deprivation-related adversity, such as physical or emotional neglect or poverty.

The researchers performed a meta-analysis of almost 80 studies, with more than 116,000 total participants. They found that children who suffered threat-related trauma such as violence or abuse were more likely to enter puberty early and also showed signs of accelerated aging on a cellular level-including shortened telomeres, the protective caps at the ends of our strands of DNA that wear down as we age. However, children who experienced poverty or neglect did not show either of those signs of early aging.

In a second analysis, McLaughlin and her colleagues systematically reviewed 25 studies with more than 3,253 participants that examined how early-life adversity affects brain development. They found that adversity was associated with reduced cortical thickness — a sign of aging because the cortex thins as people age. However, different types of adversity were associated with cortical thinning in different parts of the brain. Trauma and violence were associated with thinning in the ventromedial prefrontal cortex, which is involved in social and emotional processing, while deprivation was more often associated with thinning in the frontoparietal, default mode and visual networks, which are involved in sensory and cognitive processing.

These types of accelerated aging might originally have descended from useful evolutionary adaptations, according to McLaughlin. In a violent and threat-filled environment, for example, reaching puberty earlier could make people more likely to be able to reproduce before they die. And faster development of brain regions that play a role in emotion processing could help children identify and respond to threats, keeping them safer in dangerous environments. But these once-useful adaptations may have grave health and mental health consequences in adulthood.

The new research underscores the need for early interventions to help avoid those consequences. All of the studies looked at accelerated aging in children and adolescents under age 18. “The fact that we see such consistent evidence for faster aging at such a young age suggests that the biological mechanisms that contribute to health disparities are set in motion very early in life. This means that efforts to prevent these health disparities must also begin during childhood,” McLaughlin said.

There are numerous evidence-based treatments that can improve mental health in children who have experienced trauma, McLaughlin said. “A critical next step is determining whether these psychosocial interventions might also be able to slow down this pattern of accelerated biological aging. If this is possible, we may be able to prevent many of the long-term health consequences of early-life adversity,” she says.