ARE YOU A FREQUENT WORRIER? NEW STUDY SHOWS HOW YOU CAN DRASTICALLY REDUCE WORRY - MindBody Medicine

ARE YOU A FREQUENT WORRIER? NEW STUDY SHOWS HOW YOU CAN DRASTICALLY REDUCE WORRY

Knowledge / Research / ARE YOU A FREQUENT WORRIER? NEW STUDY SHOWS HOW YOU CAN DRASTICALLY REDUCE WORRY
Share this...

ARE YOU A FREQUENT WORRIER? NEW STUDY SHOWS HOW YOU CAN DRASTICALLY REDUCE WORRY 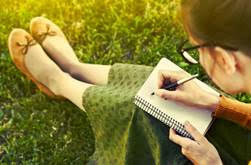 Humans worry a lot. It’s a simple fact. We allow our brain to run off with our emotions, attaching them to fabricated assumptions about experiences that may or may not ever come into being. For most of us this manifests as anxiety, or  worry about future events, and many of us simply accept this anxiety as a necessary part of life.

Surprisingly, journaling has proven to alleviate this unnecessary pressure we place on ourselves, and there are studies to prove it.

James Pennebaker, author of Writing to Heal, understands the benefits that writing can have on our emotional health, and how expressive writing specifically can actually build a better immune system. In 1986, Pennebaker asked a number of test subjects to write for fifteen minutes about the worst thing that had ever happened to them in their life. Another group was asked to write about simple things: the weather, their bedroom, or anything equally as unimportant. He observed them for six months, concluding that the first group visited the doctor significantly less than the group that wrote about mundane things. This experiment created a new field of research that explores how expressive writing improves the functioning of our immune systems, called “psychoneuroimmunology.”

Pennebaker has also found that by translating our experiences into our own words by writing them out, we are able to make them more comprehendible: “Emotional upheavals touch every part of our lives. You don’t just lose a job, you don’t just get divorced. These things affect all aspects of who we are — our financial situation, our relationships with others, our views of ourselves . . . [and] writing helps us focus and organize the experience.”

Now, a new study by Michigan State University, funded by the National Science Foundation and National Institutes of Health, has provided the first neural evidence of the benefits of expressive writing. MSU doctoral student in psychology, clinical intern at Harvard Medical School’s McLean Hospital, and lead author of the study, Hans Schroder, says:

Worrying takes up cognitive resources; it’s kind of like people who struggle with worry are constantly multitasking – they are doing one task and trying to monitor and suppress their worries at the same time. Our findings show that if you get these worries out of your head through expressive writing, those cognitive resources are freed up to work toward the task you’re completing and you become more efficient.

Schroder studied college students who identified as chronically anxious, asking them to complete a computer-based “flanker task” that measured their response accuracy and reaction times. Half of the participants were asked to write about their deepest thoughts and feelings about the task, before they did it, for eight minutes. The other half of the group wrote about what they had done the day before.

While completing the flanker task, researchers measured participants with electroencephalography, or EEG. They found that both groups performed at about the same level for speed and accuracy, but the expressive writing group performed the task more efficiently, using fewer brain resources. This study suggests that for those of us who may exhibit more anxious qualities, otherwise known as ‘worriers,’ we can utilize this technique to prepare for stressful tasks in the future. 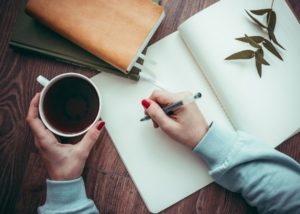 Jason Moser, an associate professor of psychology and director of MSU’s Clinical Psychophysiology Lab, and Tim Moran, a Spartan graduate who’s now a research scientist at Emory University, worked with Schroder on the study. “Expressive writing makes the mind work less hard on upcoming stressful tasks, which is what worriers often get “burned out” over, their worried minds working harder and hotter,” Moser said. “This technique takes the edge off their brains so they can perform the task with a ‘cooler head.’ ”

The more often we practice being vulnerable, not only with others but, more importantly, with ourselves, the more we gain the opportunity to expand into the space of awareness. When we bottle up our fears, we give them our bodies and minds to occupy. By spending  just five minutes a day journaling, you can unload any forthcoming stress that you may burden yourself with unnecessarily. Help yourself. Write it out.

“Writing is a spiritual practice in that people that have no spiritual path can undertake it and, as they write, they begin to wake up to a larger connection. After a while, people tend to find that there is some muse that they are connecting to.”

– Julia Cameron, creator of The Artist’s