THE GREEN SMOOTHIE FAD: THIS ROAD TO HEALTH HELL IS PAVED WITH TOXIC OXALATE CRYSTALS

Knowledge / Articles / THE GREEN SMOOTHIE FAD: THIS ROAD TO HEALTH HELL IS PAVED WITH TOXIC OXALATE CRYSTALS
Share this...

THE GREEN SMOOTHIE FAD: THIS ROAD TO HEALTH HELL IS PAVED WITH TOXIC OXALATE CRYSTALS 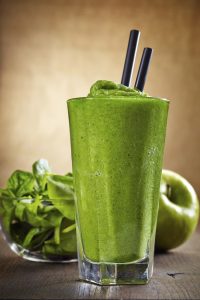 Internet news this past fall indicated the conviction of an oncologist who attempted to kill her boyfriend who was involved with another woman. The weapon of choice was ethylene glycol, popularly known as antifreeze, which had been placed in his coffee. Although emergency measures saved his life, extensive deposits of oxalate crystals, the main toxic metabolite of ethylene glycol, had caused extensive kidney and liver damage, reducing the man’s lifespan by about half.

Similar results in sabotaging your own health can occur through the regular consumption of a popular concoction called a “green smoothie.” A recent Google search for “green smoothie” yielded 609,000 hits. In addition, a recent “improving your diet” seminar that I attended promoted this same idea. Interestingly, on the same day, I reviewed test results of a urine organic acid test of a woman with oxalate values 3 times the upper limit of normal. A conversation with the patient indicated that she had recently turned to consuming daily “green smoothies” to “clean up her diet.” The most common “green” components of the most popular green smoothies are spinach, kale, Swiss chard, and arugula. Each of these greens is loaded with oxalates. A typical Internet recipe advises that 2 cups of packed raw spinach leaves is a good starting point for a smoothie. In addition to the high oxalate greens added to the blender, green smoothie proponents frequently recommend adding a variety of berries or almonds, also containing high oxalate amounts. Similar high urine oxalate results were found in organic acid tests of a number of patients with kidney stones who had decided to eat large spinach salads daily as a “move to clean up my unhealthy diet.” Unfortunately, kidney stones are not the only health problems that people who regularly consume green smoothies and large spinach salads will experience with their new “clean” diet.

Seventy-five years ago, a food scientist of the Campbell Soup Company reported:

Only a few foods, notably spinach, Swiss Chard, New Zealand spinach, beet tops, lamb’s quarter, poke, purslane, and rhubarb have high oxalate content. In them, expressed as anhydrous oxalic acid, it is often considerably over 10% on a dry basis. In fifty-three samples, including practically all commercial and many experimental varieties grown in California and in Maryland as well as those shipped from Texas, Florida and Carolina, the average anhydrous oxalic acid content was 9.02% on the dry basis (maximum 12.6, minimum 4.5). Whereas spinach greatly increases the calcium content of the low calcium but well performing basal diet, it decidedly interferes with both growth and bone formation. If to a diet of meat, peas, carrots and sweet potatoes, relatively low in calcium but permitting good though not maximum growth and bone formation, spinach is added to the extent of about 8% to supply 60% of the calcium, a high percentage of deaths occurs among rats fed between the age of 21 and 90 days. Reproduction is impossible. The bones are extremely low in calcium, tooth structure is disorganized and dentine poorly calcified. Spinach not only supplies no available calcium but renders unavailable a considerable amount of the calcium in the other foods. Considerable amounts of the oxalate appear in the urine, much more in the feces.1

The author also discovered that in addition to leading to excessive death and defective reproduction in the rats, high oxalate foods also cause soft and pliable bones and defective teeth.

Oxalate and its acid form oxalic acid are organic acids that come from three sources: the diet, fungus infections such as Aspergillus and Penicillium and possibly Candida, and also human metabolism.2–11 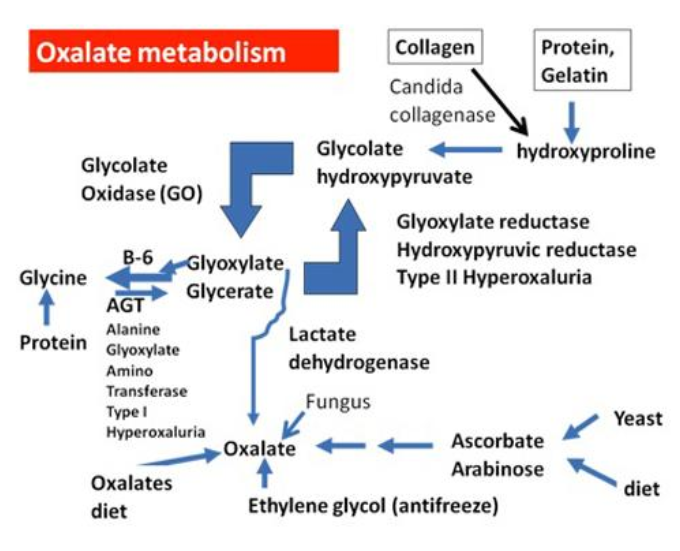 Figure 1: Summary of Oxalate Sources. Candida albicans can produce an enzyme called collagenase that breaks down collagen, a major human body protein that makes up 30% of our proteins. In addition, ethylene glycol (antifreeze) is converted to oxalate by human enzymes. Many fungi, including those that infect humans, also produce oxalates directly, and oxalate stones may be found in tissues such as the lung and sinuses that are fungi infected. Vitamin C (ascorbic acid), especially at doses of more than 2000 mg per day, can break down to form oxalates, and certain fungi can convert the Candida byproduct arabinose to oxalate. Collagenase breaks down collagen to form hydroxyproline, one of collagen’s major amino acids. Hydroxyproline is also a major constituent of gelatin, a popular dessert. Hydroxyproline can then be converted to glycolate and glyoxylate by a series of reactions in the human body. Further metabolism of glyoxylate is at a critical junction. If adequate amounts of vitamin B6 are available, the enzyme AGT converts glyoxylate to the amino acid glycine. If vitamin B6 is deficient, glyoxylate is increasingly converted to oxalate by lactate dehydrogenase, although some of it is converted back to glycolate, which is again susceptible to forming additional oxalate.

Oxalic acid is the most acidic organic acid in body fluids and is used commercially to remove rust from car radiators. Antifreeze (ethylene glycol) is toxic primarily because it is converted to oxalate. Two different types of genetic diseases are known in which oxalates are high in the urine. The genetic types of hyperoxaluria (type I and type II) can be determined from the organic acid test done at the Great Plains Laboratory. Foods especially high in oxalates include spinach and similar leafy vegetables, beets, chocolate, soy, peanuts, wheat bran, tea, cashews, pecans, almonds, berries, and many others. Oxalates are not found in meat or fish at significant concentrations. Daily adult oxalate intake is usually 80 to 120 mg/d, but it can range from 44 to 1000 mg/d in individuals who eat a typical Western diet. I estimate that the person who consumes a green smoothie with 2 cups (about 150 grams) of spinach leaves is consuming about 15 grams (15,000 mg) of oxalates, or about 150 times the average daily oxalate intake. A complete list of high-oxalate foods is available on the Internet at http://www.upmc.com/patients-visitors/education/nutrition/pages/low-oxalate-diet.aspx.

High oxalate in urine and plasma was first found in people who were susceptible to kidney stones. Most kidney stones are composed of calcium oxalate. Stones can range in size from the diameter of a grain of rice to the width of a golf ball. It is estimated that 10% of males may have kidney stones some time in their lives. Because many kidney stones contain calcium, some people with kidney stones think that they should avoid calcium supplements. However, the opposite is true. When calcium and magnesium are taken with foods high in oxalates, oxalic acid in the intestine combines with these minerals to form insoluble calcium and magnesium oxalate crystals that are eliminated in the stool. These forms of oxalate cannot be absorbed into the body. When calcium and/or magnesium are low in the diet, oxalic acid is soluble in the liquid portion of the contents of the intestine (called chyme) and is readily absorbed from the intestine into the bloodstream. If oxalic acid is very high in the blood being filtered by the kidney, it may combine with calcium and other metals, including heavy metals such as lead and mercury, to form crystals that may block urine flow, damage the kidney, and cause severe pain.

These oxalate crystals can also form in the bones, skin, joints, eyes, thyroid gland, blood vessels, lungs, and even the brain.11–14 Oxalate crystals in the bone may crowd out the bone marrow cells, leading to anemia and immunosuppression.14 In addition to individuals with autism and kidney disease, individuals with fibromyalgia and women with vulvar pain (vulvodynia) may also suffer from the effects of excess oxalates.15–18

Recent evidence also points to the involvement of oxalates in stroke, atherosclerosis, and endothelial cell dysfunction.19–21 High amounts of oxalates were found concentrated in atherosclerotic lesions of the aortas and coronary arteries of a number of individuals at autopsy. These individuals did not have oxalate deposits in the kidney but did have oxalate deposits in other organs such as the thyroid gland and testes. Since the stains used by most pathologists examining atherosclerotic lesions cannot readily determine the presence of oxalates in diseased arteries, it seems possible that this cause of atherosclerosis may be much more common than previously realized. I suspect that oxalates are a much more common cause of atherosclerosis than high cholesterol. Furthermore, since ethylenediaminetetraacetic acid (EDTA) is effective in the removal of oxalate crystals deposited in the tissues, the benefits of intravenous EDTA in the treatment of cardiovascular disease may be mediated largely by the removal of oxalate crystals and their associated heavy metals from the tissues in which they are deposited.22,23

Oxalate crystals may cause damage to various tissues due to their sharp physical structure and they may increase inflammation. Iron oxalate crystals may also cause significant oxidative damage and diminish iron stores needed for red blood cell formation.11 Oxalates may also function as chelating agents and may chelate many toxic metals such as mercury and lead. However, unlike common chelating agents such as EDTA and DMSA that cause metals to be excreted, a reaction of oxalate with heavy metals such as mercury and lead leads to the precipitation of the heavy metal oxalate complex in the tissues, increasing the toxicity of heavy metals by delaying their excretion.24

What steps can be taken to control excessive oxalates?

Measuring Oxalate Toxicity
The organic acid test (Table 1) is one of the best measures for determination of both genetic and nutritional factors that lead to toxic oxalates. The organic acid test includes two additional markers, glycolic and glyceric acids, that are markedly elevated in genetic causes of excessive oxalate, the hyperoxalurias I and II. In addition, the organic acid test includes factors such as high fungal and Candida markers that make oxalate (fungus) or their precursors (Candida). Finally, although vitamin C poses little risk of excess oxalates at doses up to 2000 mg per day, I have measured marked increases in oxalates (more than 10 times the upper limit of normal) in a child with impaired kidney function after a 50,000 mg intravenous vitamin C megadose. The organic acid test also includes the main vitamin B6 metabolite pyridoxic acid, which diminishes the body’s own production of oxalates. 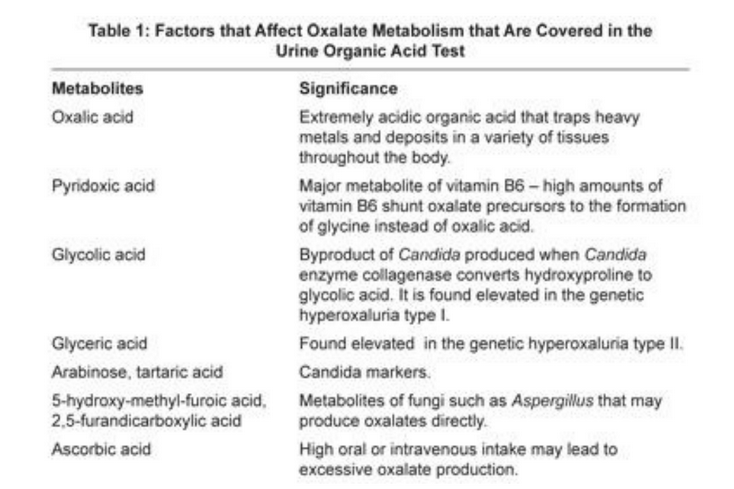 William Shaw, PhD, is board certified in the fields of clinical chemistry and toxicology by the American Board of Clinical Chemistry.  Before he founded the Great Plains Laboratory Inc., Dr. Shaw worked for the Centers for Disease Control and Prevention (CDC), Children’s Mercy Hospital, University of Missouri at Kansas City School of Medicine, and Smith Kline Laboratories.  He is the author of Biological Treatments for Autism and PDD, originally published in 1998, andAutism: Beyond the Basics, published in 2009. He is also a frequent speaker at conferences worldwide.
He is the stepfather of a child with autism and has helped thousands of patients and medical practitioners to  successfully improve the lives of people with autism, AD(H)D, Alzheimer’s disease, arthritis, bipolar disorder, chronic fatigue, depression, fibromyalgia, immune deficiencies, multiple sclerosis, OCD, Parkinson’s disease, seizure disorders, tic disorders, Tourette syndrome, and other serious conditions.