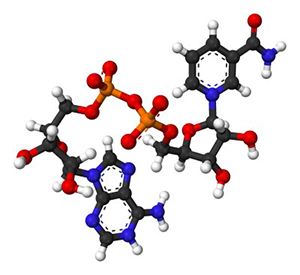 Treatment of substance abuse disorders continues to challenge clinicians and “cravings” for the abused substance are often impediments to sobriety. NicotinamideAdenine Dinucleotide (NAD) has been used in the past with claims of having anti-craving properties. Previous data from this clinic using a similar formulation of NAD support the use of NAD as a valid treatment for drug cravings. This pilot study retrospectively examined the anti-craving properties of NAD in a group of 60 patients. Additionally, patients were assessed on severity of cravings and relapse episodes at 12-20 months post treatment. 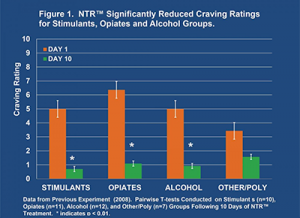 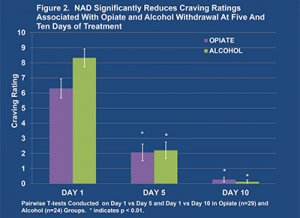 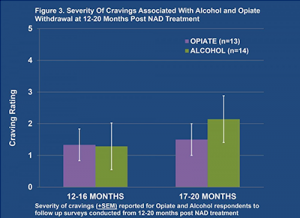 The patients were adult males and females with addictions to primarily opiates or alcohol (N=60). Six patients were omitted due to incomplete data. The treatment, Brain Restoration Plus (BR+)TMcomprised of IV infusions of NAD as well as vitamins, oral amino acids, NAC and variable PRN medications for an average of 10 consecutive days ranging from 5 to 10 hours daily at a dose range of 500mg-1500mg each day. Self-reported craving ratings (0-10 Scale) were collected on Day 1 (before starting treatment), Day 5, and on Day 10 (last day of treatment). Follow up phone surveys were conducted from 12-20 months post treatment (N= 27). Patients reported severity of cravings (1-5) and number of relapse episodes at the present time.

NAD is an effective detox treatment for alcohol and opiate addicts as evidenced by a significant reduction in craving ratings.NAD was effective in reducing and maintaining the number of relapse episodes, as well as severity of drug cravings.NAD shows potential as a long-term therapy in maintaining sobriety through minimizing drug cravings and preventing relapse.