THOUGHTS AND BELIEFS – HOW YOU CREATE YOUR EXPERIENCES

Knowledge / THOUGHTS AND BELIEFS – HOW YOU CREATE YOUR EXPERIENCES
Share this...

For an expanded understanding of how the conscious and unconscious mind create life experiences, you can read:

Chapter 4, The Unseen Anatomy: The Power of Thought and Emotion, in  Edgework – Exploring the Psychology of Disease, by Ronald Peters, MD

Thoughts and Thinking
Perhaps nothing more clearly distinguishes humans than sophisticated thinking. The ability to think at high analytical levels separates us from most, and perhaps all, other animals.

Consider the role of thought in creating the human experience. Humans discovered the nature of electricity, gravity, physics, and chemistry – and how to utilize them for human benefit – through the process of penetrating, analytical thought. We create our daily experience, too — from the trivial to the crucial — largely by directing and focusing the personal force called thought.

How we perform our work, which clothes to wear, where to go today, whom to call, which car to buy – such decisions define our day-to-day lives and all are birthed by thought. 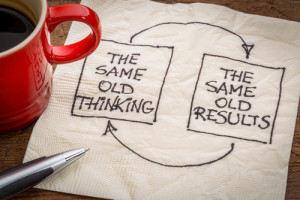 Attitudes and Beliefs
But only rarely do we start from scratch when we think. The direction our daily thoughts will travel in is largely determined by “packages” of prior thinking called attitudes, opinions, and beliefs. These packages become controlling forces in our lives, setting limits within which we live.

Those with similar attitudes and beliefs become our friends and colleagues, reinforcing our way of thinking and helping to convince us that we are “right.” …… As William Shakespeare said, “There is nothing good or bad, but thinking makes it so…”

The Healing Power of Thought – The Placebo Effect
Some of the most direct evidence for the ability of thought to produce bodily change comes from study of the so-called placebo effect. A placebo is a treatment that produces a positive result simply because the patient believes the treatment will work.

The placebo itself has no intrinsic medicinal properties to produce that benefit. Placeboes have been shown in endless medical studies to produce a 35-45 percent improvement in whatever medical condition is being treated. Even doctors who are otherwise skeptical about the psychological aspects of illness accept, and often utilize, the power of placeboes.

A dramatic example of the placebo effect occurred with the cancer drug Krebozian back when it was being touted in some media stories as a potential new miracle treatment.

A patient with metastatic lymph node cancer had been told by his doctor that he had only two weeks to live; when he heard of Krebozian, he insisted on being included in clinical trials for the drug. After ten days on the medication, the man’s tumors shrank and he was discharged from the program. Two months later, he heard a news report that the Krebozian trials were producing discouraging results; shortly thereafter, his tumors reappeared.

His physician, well aware that his patient’s beliefs were at the bottom of this yo-yo effect, told him that the batch of Krebozian used in the trials was later discovered to have been defective. He then injected the man with water, telling him that he was getting fresh, intact Krebozian. Once again the patient went into remission. He remained in good health until two months later, when he heard that Krebozian was “worthless” in the treatment of cancer. Two weeks later, he died of his original disease.

When the tranquilizer Valium was at its peak of medical use, 30 million Americans annually were taking it to reduce their stress and anxiety. Since then, however, 30 double-blind studies have shown Valium to be no more effective than a placebo. Similarly, the drug Aureomycin was hailed as an effective treatment for atypical or viral pneumonia. It was given to thousands of patients over a four-year period until a controlled study showed that it too had no advantage over placeboes.

Placebo Surgery
The placebo effect has been demonstrated even more dramatically with surgery. Consider the following experiment conducted in 1958.

At the time, obstructive coronary artery disease was treated by sewing the internal mammary artery, an artery in the chest wall, into the heart to improve blood flow to it and thereby reduce angina pain. Half the patients in the experiment received the full surgical procedure while the other half received only a skin incision with no arterial graft.

Of course, the patients weren’t let in on the ruse — both groups believed they had received the same, complete surgery. Following the operation, the two patient groups showed equal improvement in their angina symptoms, required less of the medication nitroglycerin (a common treatment for angina), and performed better on treadmill stress tests. In fact, clinical outcomes across the board were exactly the same for both groups.

In 1981, a similar project was carried out with patients in Denmark suffering from Meniere’s disease. The symptoms of Meniere’s disease can be very debilitating with constant dizziness, buzzing in the ears, and eventual deafness. Thirty patients underwent surgery to receive an inner ear shunt to treat the symptoms, but unbeknownst to them, only fifteen actually received a shunt. At the three-year follow-up point, 70 percent of the patients in both groups were experiencing significant symptom relief.

Numerous other studies have confirmed the power of placebos, which is really the power of belief. For example, one third of people get as much pain relief from placebos as they do from morphine. In other research, placebos:

In a 1974 Scientific American article entitled the “Ethics of Giving Placebos,” the authors stated that “35-45 percent of all prescriptions are for substances that are incapable of having an effect on the condition for which they are prescribed.” Dr. Halstead Holman of Stanford University has noted that “three of four of the most commonly prescribed drugs treat no specific illness.”

Psychobiology – Your Body is Listening to your Thoughts
Thoughts, especially those energized by feelings, influence the body’s chemistry and physiology by forming chemicals called neurotransmitters. First discovered in the 1970s, neurotransmitters are essentially the brain’s messenger service because they enable the brain to talk to the rest of the body. They are chemicals that transmit nerve impulses across the synapses that separate nerve cells throughout the body. Also called neuropeptides, they include chemicals with specialized functions that go by such names as lymphokines, cytokines, and growth factors; many of the body’s hormones are neurotransmitters, as well.

The sum total of all this neurotransmitter activity creates what has been termed a neuropeptide network, allowing thoughts to influence the mindbody’s physical processes. Your immune system, digestive tract, muscles, heart, and all other organs “listen” to your thoughts via the messenger service of the neuropeptide network and react just as directly as if you were sending a mental message to your hand to lift a finger.

Researchers are now beginning to penetrate the universe of the mindbody beyond the level of the neurotransmitters. Using a sophisticated new tool called positron emission tomography, or PET, scientists can now explore tiny events inside the brain. PET studies have shown how thought physically activates the brain with changes in regional blood flow as well as changes in the flow of regulatory hormones and the powerful neurotransmitters.

This new field of scientific research, the “psychobiology” of thought, bridges the previously wide gap between psychology and medicine and reveals even more convincingly than the discovery of neurotransmitters themselves that the movement of consciousness is a physical – that is, electrochemical -event in the mindbody.

Every thought that flows in your endless stream of consciousness and self-talk can potentially make a significant impact on your mindbody’s physical systems (although the effect is greatly muted by the self-opposing nature of thought, as we’ll see below).

Indeed, if we were more aware of the impact of thought on the mindbody, we would take greater care to think “healthfully.” Even those of us who have heard about the new advances in mindbody research tend to ignore the effects of our thoughts because thoughts are such a familiar and constant part of our daily experience.

No matter what we are doing, we must endure the endless mental chatter inside our heads. Most of it seems rambling and inconsequential, and even ridiculously contradictory. We want this and then we want that instead, and then we think we don’t deserve any of it. One moment, our thoughts bring us down with worry, resentment, and self-criticism; the next moment, they make us giddy with inspiration, creativity, and excitement. It appears to us as if our thoughts just add up to inner background noise that cancels itself out and amounts to nothing in the end.

But if we “do the math” on our own thoughts or just listen to ourselves and others around us, we discover that each person has definite patterns to their way of thinking. Some are pessimistic about any opportunity that presents itself, some optimistic. Some fret about every bump that appears in their path, some take even big bumps in their carefree stride. Clearly, if thoughts make a difference to our health, we would want them to be as positive as possible. Yet at various times, even the cheeriest among us are weighed down by self-imposed limitations, discontents, concerns, and pain.

It simply is not possible to control all of our thoughts and make them positive -– there are way too many of them. But we can be aware of the tone and content of our thoughts as they stream by and redirect them to be more uplifting. We can “re-frame” thoughts and turn half-empty glasses into half-full ones. And we can even concentrate and focus our thoughts on specific goals, including healing ourselves. I believe that science will eventually discover that no drug has as much power over our body systems as focused thought.