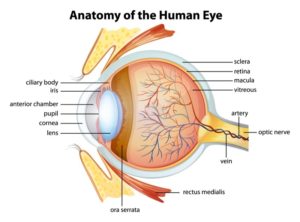 Light passes through the cornea of your eye and is focused by your lens onto the retina, a thin layer of cells located at the back of your eyeball. Embedded in the retina are millions of light sensitive cells, called rods and cones. When light strikes either the rods or the cones of the retina, it’s converted into an electric signal that is relayed to the brain via the optic nerve. The brain then translates the electrical signals into images, or vision; the ability to see, perceive and create your life journey.

Your macula is the focal point in your retina where 90% of your vision occurs.  The macula contains the highest concentration of light-sensitive cone receptor cells and is responsible for detailed color vision. Here is where the key nutritional part comes in.  Before light hits your cone receptor cells it passes through a retinal pigment layer, which contains high concentration of three carotenoid pigments, lutein, zeaxanthin and meso-zeaxanthin, which are collectively referred to as macular pigments. 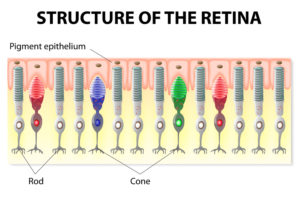 Light is a powerful energy which can gives us vision, but too much can take it away. Parents tell children not to stare at the sun because permanent retinal damage can occur after staring for just a few minutes. This is called solar retinopathy.

In the 1993 Waterman study 838 sailors in the oyster fleet of Maryland were followed for light exposure. Blue light exposure was found to increase the risk of age-related macular degeneration (AMD). 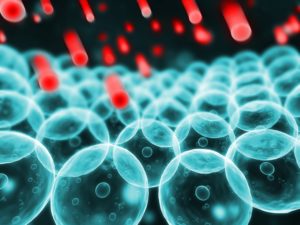 The damaging effect of light on the retina is due to the production of “free radicals”, which are molecules that are very reactive because they have lost an electron and will charge around like a bull in a china shop seeking another electron which they will steal in order to create molecular peace or balance once again. This electron thievery is the cause of cellular structural damage and is called “oxidative stress” and is considered to be the cause of most all diseases as well as retinal damage, or, macular degeneration.  The body protects against oxidative stress with antioxidants, such as vitamin C and E, which simply donate an electron to the tantrum throwing free radical, thus restoring harmony in the vast cellular universe within our bodies. 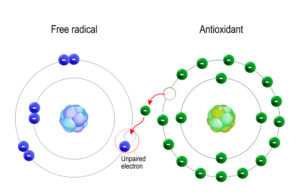 In summary, the macular pigments are powerful antioxidants which concentrate in the retina, as well as other parts of the brain, to protect the retina from light induced free radical damage. 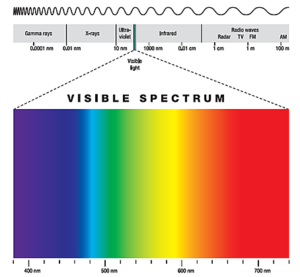 WHAT IS BLUE LIGHT?

Sunlight is made up of red, orange, yellow, green, blue, indigo and violet light. When combined, it becomes the white light we see. Each of these has a different energy and wavelength. Rays on the red end have longer wavelengths and less energy. On the other end, blue rays have shorter wavelengths and more energy. Light that looks white can have a large blue component, which can expose the eye to a higher amount of wavelength from the blue end of the spectrum.

The largest source of blue light is sunlight. In addition, there are many other sources:

Blue light exposure you receive from screens is small compared to the amount of exposure from the sun.  And yet, there is concern over the long-term effects of screen exposure because of the close proximity of the screens and the length of time spent looking at them. According to a recent National Eye Institute funded study, children’s eyes absorb more blue light than adults from digital device screens.

Blue light is good for us – it has been shown to boosts alertness, help memory and cognitive function, as well as elevating mood.  It also helps to regulate circadian rhythm – the body’s natural wake and sleep cycle. Exposure to blue light during daytime hours helps maintain a healthful circadian rhythm. Too much exposure to blue light late at night from smart phones, tablets, and computers can disturb the wake and sleep cycle, leading to problems sleeping and daytime tiredness.

However, too much blue light may prematurely age the eyes. Early research shows that too much exposure to blue light could lead to damaged retinal cells and age-related macular degeneration.

You can protect yourself from too much blue light exposure by the following:

Once again, macular pigments help to preserve retinal health by absorbing blue light, thereby adding another level of protection for your vision.  If your diet is deficient in macular pigments, your eyes are vulnerable. 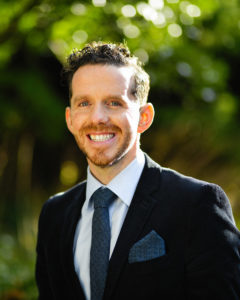 Professor John Nolan, PhD, the pioneering Director of the Nutrition Research Centre in Ireland and Principal Investigator, Macular Pigment Research Group has discovered another intriguing benefit of the macular pigments, lutein, zeaxanthin and meso-zeaxanthin. They are concentrated not only in the macula of the retina, but also in several memory centers in the brain.  And, memory improves when you increase your intake of these powerful plant pigments.

Dr Nolan and his research group used a Dual-wavelength fundus autofluorescence (AF) technique to determine the amount of macular pigments in the retina of test subjects.  He then gave macular pigments to patients with impaired contrast sensitivity, an early sign of macular degeneration, and documented improvements in a significant number of people.  He published his research in numerous publications, which can be reviewed at the end of this article.

And, much to his surprise, he noted that study participants also noted an improvement in memory and other aspects of cognition.  Since then, numerous researchers have documented the benefits of lutein and other macular pigments on brain function.

WHERE DO WE GET THE MACULAR PIGMENTS?

Foods with the highest concentrations of lutein and zeaxanthin include leafy greens such as kale, spinach, Swiss chard and turnip greens. Also colored vegetables such as squash, sweet peppers, sweet corn, and peas are excellent natural sources of eye-healthy carotenoids.

However, the foods we eat, even the healthy ones like spinach and kale, do not have the same level of nutrients when compared to 50 years ago. Many nutrients like the ones found in our eyes were developed by plants for protection of the plant. Over farming and early harvesting along with advanced farming methods used today reduce the need for plants to accumulate many of these important nutrients. In fact, the Department of Agriculture compare the level of nutrients in 43 bowls of spinach today to be equivalent to 1 bowl back in 1953.

Due to the loss of nutrient density in modern vegetable produce, I recommend a food supplement called MacuHealth. This product contains only the three nutrients found in the retina in the proper concentration. It has been extensively researched and clinically tested for safety, product integrity, bioavailability and efficacy.

“Supplementation with all three carotenoids in a MZ:L:Z (mg) ratio of 10:10:2 (MacuHealth) has been shown by the highest level of evidence (Level 1, well-designed randomized, double masked, clinical trial) to result in visual improvements in persons with and without macular disease (including persons with age-related macular degeneration). 1;2;3 The use of MacuHealth is the most important advancement in eye science since the invention of spectacles”

Clinical studies show that when taking one MacuHealth soft gel each day: 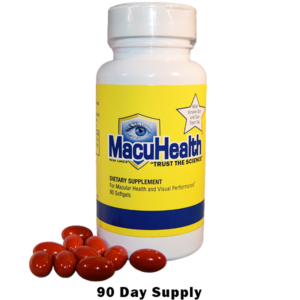 Each bottle of MacuHealth is a 90-day supply. You simply take 1 soft gel daily with a meal. It is best absorbed if taken with Omega 3 DHA/EPA supplement.