THE MASTER AND HIS EMISSARY: THE DIVIDED BRAIN AND THE MAKING OF THE WESTERN WORLD BY IAIN MCGILCHRIST - MindBody Medicine

Knowledge / Articles / THE MASTER AND HIS EMISSARY: THE DIVIDED BRAIN AND THE MAKING OF THE WESTERN WORLD BY IAIN MCGILCHRIST
Share this...

“You do not resolve a stress conflict in your life with intellect, you do so with emotion” are the intriguing words of a Master Teacher of mine which have echoed in my mind for decades unsettling my academically trained intellect. Now I consider myself a “recovering intellectual” as I have learned to express my emotions. I have realized that left brain, analytical thinking is certainly a useful tool but will create a life out of balance. Emotion arising from the heart is a more important force in the healing process than intellect.  I have listened to thousands of patients and seen the pattern again and again. Those that respond to dis-ease of any kind first with feeling and then with intellect heal much more efficiently.  And now Ian McGilchrist presents persuasive evidence that the right brain is the primary brain for us all and serves to give us the “big picture” of the changing landscape of our experience.  Our ancestors survived on the savannah by feeling safe or in danger as they viewed the complexity of their environment.  If some aspect of the big picture seemed curious, the right brain would send a message to the analytical left brain for clarification.  By living with our heart, we gain an intuitive knowingness which comes with time and experience and will guide us to understand the dangers of intellect without heart, or science without compassion.

A book review by Mary Midgley 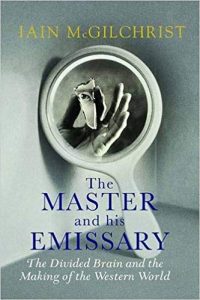 This is a very remarkable book. It is not (as some reviewers seem to think) just one more glorification of feeling at the expense of thought. Rather, it points out the complexity, the divided nature of thought itself and asks about its connection with the structure of the brain.

McGilchrist, who is both an experienced psychiatrist and a shrewd philo–sopher, looks at the relation between our two brain-hemispheres in a new light, not just as an interesting neurological problem but as a crucial shaping factor in our culture. He questions the accepted doctrine that the left hemisphere (Left henceforward) is necessarily dominant, the practical partner, while the right more or less sits around writing poetry. He points out that this “left-hemisphere chauvinism” cannot be correct because it is always Right’s business to envisage what is going on as a whole, while Left provides precision on particular issues. Moreover, it is Right that is responsible for surveying the whole scene and channelling incoming data, so it is more directly in touch with the world. This means that Right usually knows what Left is doing but Left may know nothing about concerns outside its own enclave and may even refuse to admit their existence.

Thus patients with right-brain strokes – but not with left-brain ones – tend to deny flatly that there is anything wrong with them. And even over language, which is Left’s speciality, Right is not helpless. It usually has quite adequate understanding of what is said, but Left (on its own) misses many crucial aspects of linguistic meaning. It cannot, for instance, grasp metaphors, jokes or unspoken implications, all of which are Right’s business. In fact, in today’s parlance, Left is decidedly autistic. And, since Left’s characteristics are increasingly encouraged in our culture, this (he suggests) is something that really calls for our attention.

The book’s title comes from the legend of a wise ruler whose domains grew so large that he had to train emissaries to visit them instead of going himself. One of these, however, grew so cocky that he thought he was wiser than his master, and eventually deposed him. And this, says McGilchrist, is what the Left hemisphere tends to do. In fact, the balance between these two halves is, like so many things in evolution, a somewhat rough, practical arrangement, quite capable of going wrong. The bifurcation seems to have become necessary in the first place because these two main functions – comprehensiveness and precision – are both necessary, but are too distinct to be combined. The normal sequence, then, is that the comprehensive partner first sees the whole prospect – picks out something that needs investigating – and hands it over to the specialist, who processes it. Thus the thrush’s Left is called in to deal with the snail-shell; the banker’s Left calculates the percentage. But, once those pieces of work are done, it is necessary for the wider vision to take over again and decide what to do next.

Much of the time this is indeed what happens and it is what has enabled brains of this kind to work so well, both for us and for other animals. But sometimes there is difficulty about the second transaction. Since it is the nature of precision not to look outward – not to bother about what is around it – the specialist partner does not always know when it ought to hand its project back to headquarters for further processing. Being something of a success-junkie, it often prefers to hang on to it itself. And since we do have some control over this shift between detailed and general thinking, that tendency can be helped or hindered by the ethic that prevails in the culture around it.

McGilchrist’s suggestion is that the encouragement of precise, categorical thinking at the expense of background vision and experience – an encouragement which, from Plato’s time on, has flourished to such impressive effect in European thought – has now reached a point where it is seriously distorting both our lives and our thought. Our whole idea of what counts as scientific or professional has shifted towards literal precision – towards elevating quantity over quality and theory over experience – in a way that would have astonished even the 17th-century founders of modern science, though they were already far advanced on that path. (Thus, as a shocked nurse lately told me, it is proposed that all nurses must have university degrees. Who, she asked, will actually do the nursing?) And the ideal of objectivity has developed in a way that would have surprised those sages still more.

This notion, which now involves seeing everything natural as an object, inert, senseless and detached from us, arose as part of the dualist vision of a split between body and soul. It was designed to glorify God by removing all competing spiritual forces from the realm of nature. It therefore showed matter itself as dead, a mere set of billiard-ball particles bouncing mechanically off each other, always best represented by the imagery of machines. For that age, life and all the ideals relevant to humanity lay elsewhere, in our real home – in the zone of spirit. (That, of course, was why Newton, to the disgust of later scholars, was far more interested in theology than he was in physics.) But the survival of this approach today, when physicists have told us that matter does not actually consist of billiard balls, when we all supposedly believe that we are parts of the natural biosphere, not colonists from spiritual realms – when indeed many of us deny that such realms even exist – seems rather surprising.

Why do we still think like this? Why can’t we be more realistic? McGilchrist’s explanation of such oddities in terms of our divided nature is clear, penetrating, lively, thorough and fascinating. Though neurologists may well not welcome it because it asks them new questions, the rest of us will surely find it splendidly thought-provoking. And I do have to say that, fat though it is, I couldn’t put it down.

Mary Midgley’s Beast and Man: The Roots of Human Nature is published by Routledge.