The discovery of the remarkable anti-cancer agent, fermented wheat germ extract (FWGE), is based on the work of two legendary Nobel Laureates, Otto Warburg and Albert Szent-Gyorgyi.  Dr. Warburg showed that cancer cells thrive on sugar, aka glucose, using primitive oxygen free metabolism.  Later, Dr. Szent-Gyorgyi isolated the compounds in fermented wheat germ that blocked glucose uptake in cancer cells, thereby choking off their energy supply, eventually cancer cell death.  FWGE has proven effective against a variety of cancer types, including breast, colon and head and neck cancers.  In one study on colon cancer patients FWGE reduced the risk of death by 70%.  It is considered Standard of Care for cancer patients in Hungary. 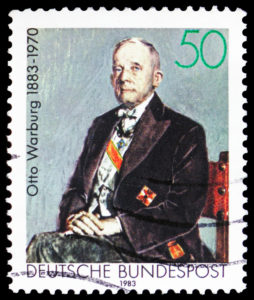 Dr. Otto Warburg was awarded the Nobel Prize more than 70 years ago for his discovery that cancer cells use glucose at a rate 10 to 50 times higher than healthy cells through direct glycolysis via non-oxidative pathways.1 Called “the Warburg Effect,” this characteristic hypermetabolic activity fuels the explosive growth of cancer, steals glucose from healthy tissue and produces metabolic byproducts that contribute to systemic illness. Warburg theorized that if the uptake of glucose into cancer cells could be inhibited, their energy supply could be choked off, slowing or stopping cancer growth and forcing cancer cells to die. A few years later, Hungarian biochemist Dr. Albert Szent-Gyorgyi, also a Nobel Laureate, began seeking the explanation for low rates of cancer among populations that consume substantial amounts of whole-grain products, compared to populations that don’t. By the early 1980s, Szent-Gyorgyi had isolated natural compounds within wheat germ that he believed would have anti-cancer properties if consumed in supplemental amounts.2 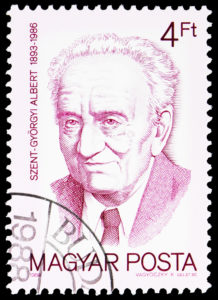 Recent research has linked the findings of these two Nobel Laureates: A unique fermented wheatgerm extract (FWGE) blocks glucose uptake within cancer cells, choking off their energy supply, reducing their ability to grow and proliferate, and eventually causing cancer cell death by apoptosis, without any detrimental effect to healthy cells.

The limitations of conventional cytotoxic anti-cancer treatments such as radiation and chemotherapy are clear. They are lethal to both cancerous and healthy cells, so they produce highly undesirable side effects up to and including raising the risk of future cancers. These shortcomings led to the development of targeted therapies (i.e., smart drugs) that inhibit molecular targets present or overabundant only in cancer cells. However, the initial exuberance over the early successes of these targeted therapies has been balanced in recent years by the discovery that the mutated genes which produce such molecular targets continue to mutate over time. This means the molecular targets assume new shapes over time and are no longer affected by drugs designed to bind to an earlier, original version of the target.3-5

Targets offered by the Warburg Effect are very different. They are not the result of mutated genes. Instead, they are simply enzymes upon which cancer cells are far more dependent than are normal cells. These enzyme targets are stable over time; essential to tumor cell growth, survival and proliferation; and are present in virtually all cancers. The opportunity to focus effectively on such targets has existed in theory for some time, but has become a reality only in recent years, as the tools of modern science have caught up with the wisdom and intuition of visionaries from threequarters of a century ago.

Dr. Warburg noted in his Nobel acceptance speech that fully understanding cell metabolism was extremely difficult because of the fast and short-lived nature and overwhelming number of chemical reactions that make up metabolic pathways.6 He knew what happened – that cancer cells used large amounts of glucose to thrive – but he didn’t know the biochemical details of exactly how they did so. In the mid- and late-1990s, researchers developed sophisticated new tools for studying metabolic reactions in cells in precise detail.7 One such technique, called stable isotope-based dynamic metabolic profiling (SiDMAP), uses glucose tagged with special, heavy isotopes of carbon (C-13) to trace the use of glucose in the synthesis of RNA,DNA and fatty acids. The technique identifies which key metabolic chemicals can be used as targets – targets that if blocked can thwart cancer cells ability to obtain energy or to make the DNA necessary to replicate.

The FWGE produced a radical, dose dependent inhibition of transketolase (TK), slowing glucose uptake into pancreatic cancer cells and inhibiting the cells’ synthesis of RNA. At the same time, FWGE increased direct glucose oxidation and ribose recycling in the pentose cycle – hallmarks of normal cell metabolism. The cancer cells were forced to revert to the metabolic pathways used by normal cells, using glucose more for production of fatty acids and cell-structure components and less for ribose. These metabolic shifts promoted cell differentiation to normal cell phenotypes in some cells and caused death by apoptosis in other cancer cells.9

FWGE has been shown to have similar results with many other types of cancer. In a study with Jurkat leukemia, cells were treated with increasing amounts of FWGE for 48 and 72 hours.10 TK activity was inhibited by more than 50 percent in two days and by more than 90 percent in three days. Glucose carbons going into new nucleic acids so new cancer cells could be made were reduced by 40.2 percent, reducing cell proliferation. The leukemia cells’ ability to obtain energy was inhibited by over 95 percent in 48 hours by FWGE inhibition of the activity of hexokinase, an enzyme key to energy production via glycolysis. Simultaneous inhibition of enzymes key to both oxidative and non-oxidative glucose utilization led to apoptosis.

FWGE also inhibited the enzyme glucose-6-phosphate dehydrogenase (G6PDH), a metabolic enzyme essential for using glucose carbons to make ribose through another pathway. G6PDH levels fell by more than 90 percent in three days at a dose of 0.5 mg/ml of FWGE, and by more than 95 percent in a shorter time with a higher dose. This showed an ability of the FWGE to virtually eliminate cancer cell proliferation through inhibition of both major and minor pathways of cancer cell synthesis of ribose.11

Further evidence that the anti-cancer effect of FWGE is not dependent on the cancer type was illustrated in experiments with estrogen-sensitive (ER+) and estrogen-negative (ER-) breast cancers. Tumor lines from mice and from humans were implanted in female mice. FWGE inhibited ER+ tumors by 50 percent, better than the 42 percent inhibition rate for the tamoxifen, 26 percent for exemestane and 25 percent for anatrozole. On the ER- cancers, the anti-estrogenic drugs tamoxifen, exemestane and anatrozole have been shown to be ineffective, but FWGE was just as effective, inhibiting tumor growth by 52 percent.12 Because FWGE inhibited growth of both estrogen-sensitive (ER+) and estrogen in dependent (ER-) tumors equally, the data suggest it was the restriction of the Warburg Effect’s glucose uptake for energy and cell replication that was responsible, rather than interference with estrogen activity.

Proof of the principle that FWGE can inhibit cancers by targeting the Warburg Effect has been shown in many in vivo and in vitro experiments and has shown promise in clinical trials.

In a multicenter clinical trial involving 170 patients with colorectal cancer, FWGE reduced the risk of death by almost 70 percent.13 The 66 patients taking supplemental quantities of FWGE had improved overall survival compared to controls (12.1 percent deaths vs. 31.7 percent); far fewer recurrences (3.0 percent vs. 17.3 percent) and far fewer metastases (7.6 percent vs. 23.1 percent). FWGE’s inhibition of glucose uptake and use of glucose carbons to synthesize ribose for DNA for proliferation were significant factors in the slower disease progression and increased survival.

As a result of these and other findings, FWGE is now part of the standard of care for colorectal cancer in Hungary, where FWGE is approved as a medical nutriment in support of patients undergoing treatment.

Clinical studies of FWGE in squamous cell cancers of the head and neck (SCHNN) led a European surgeons association specializing in head and neck cancers to approve a recommendation that FWGE be a routine part of the standard of care for treatment of all such cancers.14

In the first study, 50 head and neck cancer patients were treated with surgery, chemotherapy and/or radiotherapy, with or without the addition of FWGE. Three years later, the majority of those receiving FWGE, including five of six with advanced salivary gland cancer, had no new recurrences or metastasis. Benefits of conventional treatments were enhanced by FWGE, and side effects were reduced. Patients on FWGE gained appetite, weight and strength.

In the second study, involving 45 adults with stage II or stage III cancers of the mouth, addition of FWGE to surgery, chemotherapy and radiation reduced the risk of the cancer progressing to a more advanced stage by 85.3 percent, mainly by reducing risk of metastasis (spread). At five years, 74 percent of FWGE patients were alive, compared to 45.5 percent of patients getting only conventional treatment.

In the third study, Italian researchers found that 60 days of FWGE after surgery and other conventional treatment for advanced head and neck cancer patients (stages III and IV) improved the patients’ quality of life (Spitzer QOL index), lowered oxidative stress and prevented weight loss in the 22 who got FWGE, compared to the 33 who didn’t. This led researchers to report FWGE as having a pivotal benefit in the treatment of patients with advanced head and neck cancers. FWGE has been shown to slow disease progression in stage III melanoma patients15 and to improve quality of life and relieve fatigue in advanced lung cancer.

The data from clinical studies of FWGE show improved overall survival, improved disease-free survival, and aim proved quality of life with no undesirable effects on healthy tissue. These benefits make it clear that targeting the mechanisms of Warburg-Effect metabolism, which is restricted to cancer cells, provides unique opportunities to benefit patients without the undesirable side effects characteristic of cytotoxic cancer therapies, and without the narrow applicability and target slippage of “smart” synthetic drugs. The incredibly innovative and insightful cancer research begun by another century’s brightest scientists has come full circle. We now know not just that Warburg and Szent-Gyorgyi were right, but also why. We can see how cancer patients have benefited from the work of these geniuses, and how and why they are likely to continue to do so.

Currently, fermented wheat-germ extract is available as the medical nutriment Avemar® from Biropharma of Budapest, Hungary, and as the nutritional supplement AvéTM, from American Biosciences of Blauvelt, N.Y.

Additional research on FWGE can be viewed at www.pubmed.gov using the search term “fermented wheat germ” and at www.avemarresearch.

Dr. Pelletier is a lecturer, author and the Director of Functional Medicine at the LaValle Metabolic Institute in Cincinnati, OH. She specializes in hormone replacement, men’s and women’s health, and is a Defeat Autism Now (DAN!) physician.