VITAMIN B12: ESSENTIAL FOR HEALTHY BLOOD, BRAIN, AND DNA

Knowledge / Articles / VITAMIN B12: ESSENTIAL FOR HEALTHY BLOOD, BRAIN, AND DNA
Share this... 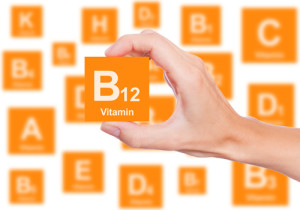 Your ability to think and deliver oxygen to the cells in your body depends on vitamin B12.  In addition, this key player in the enormous wisdom of your body helps to prevent stroke, heart disease and cancer.  If Big Pharma could patent B12, you would hear about it nightly during the evening news.

Vitamin B12 has the largest and most complex chemical structure of all the vitamins.  Since it contains the metal ion cobalt, the term cobalamin is used to refer to compounds having vitamin B 12 activity.

Methylcobalamin is the primary form of the vitamin used by the body.  The food industry can extract B12 easier in the form of cyanocobalamin and this is the form found in many vitamin and mineral supplements.  While it is easy for the body to convert cyanocobalamin into methylcobalamin, the cyanide fraction, which is a known poison found in cigarette smoke and charcoal, must be eliminated from the body like any toxin.

Methylcobalamin is required for the function of the folate-dependent enzyme, methionine synthase. This enzyme is necessary for the synthesis of the amino acid, methionine, from homocysteine.

Methionine in turn is required for the synthesis of S-adenosylmethionine (SAMe), a universal methyl donor used for almost 100 essential biological reactions in the body, involving DNA, RNA, hormones, proteins and lipids.

Methylation of DNA is essential in cancer prevention. Inadequate function of methionine synthase can lead to an accumulation of homocysteine, which has been associated with increased risk of cardiovascular diseases.  Elevated homocysteine is considered by some to be a marker for DNA health.

According to the medical literature, B12 deficiency is estimated to affect 10%-15% of individuals over the age of 60.  I believe many more people have B12 deficiency due to the digestive problems that are common with people of all ages.

In the alkaline environment of the small intestine, B12 is bound to intrinsic factor, a protein secreted by specialized cells in the stomach.  Many people, especially those with a history of digestive problems do not make enough intrinsic factor.

In the elderly, food-bound vitamin B12 malabsorption is thought to result mainly from atrophic gastritis, a chronic inflammation of the lining of the stomach that ultimately results in the loss of glands in the stomach and decreased stomach acid production. 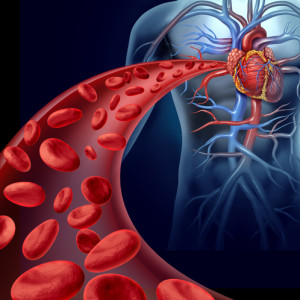 Elevated homocysteine levels are thought to promote blood clotting and impair the function of the endothelium, the complex biologically active lining of the arteries.  It also causes oxidation of lipids in the body, which is important in cardiovascular and brain function.  And finally, high homocysteine can induce vascular smooth muscle proliferation which may contribute arterial narrowing.

Folate is required for synthesis of DNA, and there is evidence that decreased availability of folate results in strands of DNA that are more susceptible to damage. Deficiency of vitamin B12 traps folate in a form that is unusable by the body for DNA synthesis. Both vitamin B12 and folate deficiencies result in a diminished capacity for methylation reactions. Thus, vitamin B12 deficiency may lead to an elevated rate of DNA damage and altered methylation of DNA, both of which are important risk factors for cancer.

A recent series of studies in young adults and older men indicated that increased levels of homocysteine and decreased levels of vitamin B12 in the blood were associated with a biomarker of chromosome breakage in white blood cells. In a double-blind, placebo-controlled study, the same biomarker of chromosome breakage was minimized in young adults who were supplemented with 700 mcg of folic acid and 7 mcg of vitamin B12 daily in cereal for two months.

The investigators found no relationship between breast cancer and serum levels of vitamin B6, folate, or homocysteine.

A case-control study in Mexican women (475 cases and 1,391 controls) reported that breast cancer risk for women in the highest quartile (1/4) of vitamin B12 intake was 68% lower than those in the lowest quartile.

Stratification of the data revealed that the inverse association between dietary vitamin B12 intake and breast cancer risk was stronger in postmenopausal women compared to premenopausal women, though both associations were statistically significant.

Researchers have long been interested in the potential connection between vitamin B12 deficiency and dementia. A deficiency in vitamin B12 causes an accumulation of homocysteine in the blood and might decrease levels of substances needed to metabolize neurotransmitters. Observational studies show positive associations between elevated homocysteine levels and the incidence of both Alzheimer’s disease and dementia. Low vitamin B12 status has also been positively associated with cognitive decline.

Vitamin B-12 deficiency is especially common among vegetarians and vegans, but it’s also surprisingly common in meat eaters as well.  Again, this is likely due to common intestinal absorption problems.

B-12 deficiency is widespread

A recent study done at Oxford University and published in the journal Neurology, suggested that up to 40% of the population may be deficient in vitamin B-12.

Symptoms of B-12 deficiency

1. Chest pain or shortness of breath
2. Fatigue or unexplained weakness
3. Dizziness, trouble with balance, and fainting
4. Confusion, memory loss or dementia
5. Coldness, numbness or tingling in the hands and feet
6. Slow reflexes or diminished nervous system function
7. Pale skin or yellowing of the skin
8. Sore mouth and tongue

How to take vitamin B12

Intramuscular injections of B12 are highly effective because they bypass the gut and go directly into the bloodstream.  If you suspect B12 deficiency, an injection is a good choice to see if it makes you feel better with more energy.  Thereafter you can take another form, such as sublingual. 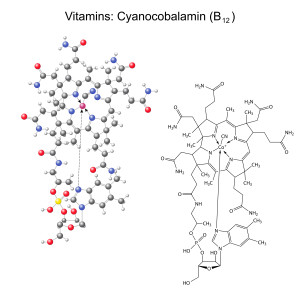 Cyanocobalamin is a inexpensive, synthetic chemical made in a laboratory and you cannot find this form in nature.  Low-end vitamin manufacturers use it because it can be bought in bulk and added to products with claims that they “contain vitamin B-12.”

Removing the cyanide molecule from the vitamin and then flushing it out of your body requires using up so-called “methyl groups” of molecules in your body that are needed to fight things like homocysteine (high levels cause heart disease).

By taking low-quality cyanobalamin, you’re actually stealing methyl groups from your body and making it do more work at the biochemical level. This uses up substances such as glutathione that are often in short supply anyway, potentially worsening your overall health situation rather than helping it.

The best choice is methylcobalamin, which is the form that exists in nature, and it is pre-methylated, meaning it’s ready for your biochemistry to put to immediate use. Methylcobalamin has several key advantages over cyanocobalamin:

1. It is better absorbed from the digestive tract.
2. It is better retained in the tissues
3. It does not contain cyanide.
4. It is more effective at enhancing the production of SAME

I believe the best way to take methylcobalamin is under the tongue, or, sublingual.